Cat's out of the Bag!

Prelude of the Chambered 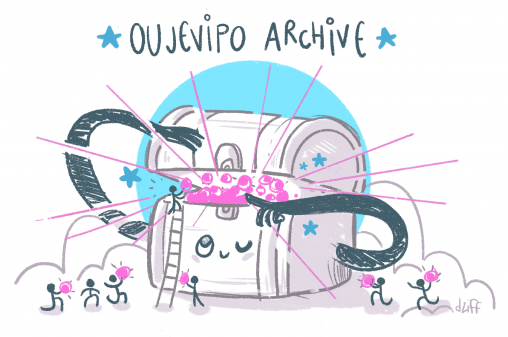 This is it! My work is done! The Oujvipo Archive is complete!

Well… Almost. I managed to archive 65% of the games on my own, and with your help, I went up to 85%. I have no clue on how to find the last 15% so now is the time to declare this project officially over. The Oujevipo Archive is ready to be stored and to enjoy what I hope will be a very long life.

What’s in the Archive ?

Tldr: I want to archive the 1,800 games featured on Oujevipo.fr and I need your help. Skip to the paragraph « How to help » for practical information.

On 01/10/10, I opened a blog.
I had realized the internet was full of weird, fun, creative, experimental games and I wanted to share them with the world.
And that’s what I did, for (almost) ten years, reviewing nearly 1,800 games.… Lire la suite

As an exercise in style, OUJEVIPO and VISAGES DU MONDE (a french culturel center in Cergy, close to Paris) invite you to participate to the NO FUTURE game dev CONTEST. Your game will have to obey to strict technical and thematic constraints… Because your freedom and creativity match to a system of laws and rules.

The main theme of the contest will be announced on june 15th. (edit: it’s « Work it »)Please, register right now.… Lire la suite

(Translated by Heidi Sulzdorf, February 18, 2011. Thanks to her and to Adam Liszkiewicz)

Robot Butler is a successful experiment on the theme of a failed experiment.

In some future time, or in the recent past of an alternate universe, Robot Butlers have finally been invented. The human being has become a poor wretch fit only to pass the time in bed in front of a flat-screen TV. The “American Way of Life” has reached its pinnacle, and the greatest of liberties – the most fundamental right emblazoned at the core of the constitution – is now the right to do nothing.… Lire la suite