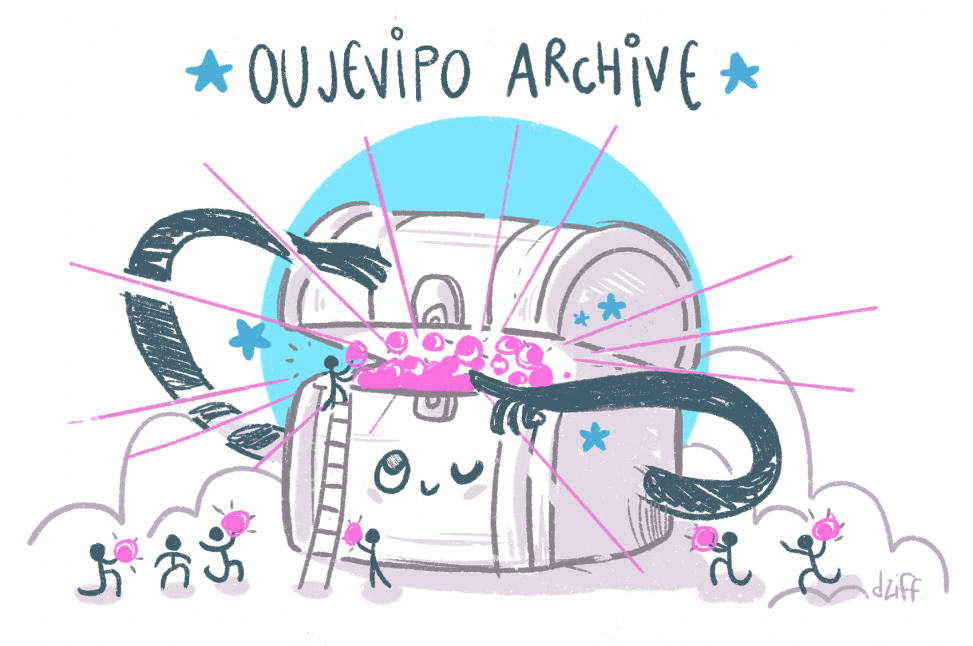 This is it! My work is done! The Oujvipo Archive is complete!

Well… Almost. I managed to archive 65% of the games on my own, and with your help, I went up to 85%. I have no clue on how to find the last 15% so now is the time to declare this project officially over. The Oujevipo Archive is ready to be stored and to enjoy what I hope will be a very long life.

What’s in the Archive ?

– The list of all the games, with their title, credits, platform and year of release.

– A « What is this » file explaining what this archive is about.

– A « How to use » file explaining how to find and run games.

– A collection of tools/software needed to run all the games.

– A screenshot for each game reviewed on the website (archived or not).

I had fun making some charts based on the Oujevipo Archive stats, and they might tell a few things about the game jam scene between 2008 and 2018 but keep in mind that all this is based upon a highly subjective collection of games, these stats might not be representative of anything.

Here’s a distribution of the games I covered by year.

No surprise here. I was much more productive during the early years than the late ones.

This one is a little bit more interesting: the distribution by platform.

As you can see, dowloadable games and web-based games are roughly 50/50. Now let’s look at the evolution of this distribution by platform over the year :

What is the most striking here is the implacable decline of flash games, while web-based formats take over (HTML5 for instance). As you can see Unity Web Player games never really took off BUT, the games listed here under « Unity Web Player » were the ones that were only played via Unity Web Player. Games that were also proposed as executable (as it was often the case) fall under the « .exe » category.

Now let’s look at preservation ratios. You would think the later a game was released, the easiest it would be for me to archive, right? Well…

The answer might appear in the next chart: The % of games I managed to archive/platform:

Executables and Flash games are doing great ( Kudos to Flash for being one of the best format for preservation even after it’s officially « dead »). Without surprise, web based games that aren’t built on Flash suffered considerably more. But it’s nothing compared to games built for Unity Web Player (and Unity Web Player only, remember?). 75% are lost. Most of them weren’t even 10 years old. That’s pathetic. And if you watched closely the previous charts you would have noticed that Unity Web Player became popular with indies around 2011. Coincidence? I think not!

Here’s one last chart which doesn’t teach us anything more, but it has been requested and I think it’s pretty:

Now I’m looking for associations, libraries, museum that are willing to store this archive on their servers/hard drives/microfilms. I’m already in touch with the BnF, the Internet Archive and the MO5 association, but I want to put that egg in as many basket as possible so please contact me at pcorbinais [at] protonmail [dot] com if you’re interested. With your help, all these weird little games could be playable for DECADES! Or maybe CENTURIES!

There are a lot of people I need to thank for their help with the archive. Thanks to all the developers who were kind enough to dig inside their old hard drives or even rebuild the games from sources, thanks to Delphine Fourneau for the nice cover art, and special thanks to all the fine folks who helped in the making of this archive in one way or another (in no specific order) : Léo Duquesne, Lucas Cimon, Shertigan, Xavier Girard, Jessica Bruno, Nat, Armel Lardeau, Léon Arnott, Jacob Keane, Soldat Louis, Victor Caymaris, Rae Richardson, WeaselZone, Florent Provansal, Sylvain Gastal, Jonatan Van Hove…

I’m probably forgetting a lot of people, I didn’t keep track of every game that has been sent to me, I hope you’ll forgive me.

Now let’s make another piece of History by making and playing more games.